Here's What We Will Cover:

What is Artificial Intelligence?

Artificial intelligence (AI) is the simulation of human intelligence processes by machines, usually computer systems. AI programs focus on three main cognitive skills: learning (acquiring data and creating rules for sorting that data), reasoning (choosing the right data to achieve the desired outcome), and self-correction (fine-tuning the data sorting for the most accurate results). The data sorting rules are known as algorithms, which offer step-by-step instructions for how to achieve an outcome.

All US cellular carriers have now launched some form of 5G. What is 5G? 5G simply stands for fifth-generation cellular wireless. Its standards were first set in late 2017. There are three basic types of 5G service: low-band, mid-band, and high-band. They’re all incompatible right now, and they all perform differently. Even though all the US carriers “have” 5G right now, it will be another couple of years before we see significant changes from it. By comparison, 4G first rolled out in 2010, and it was 2012/2013 before major apps that required 4G to work became popular. However, Ericsson, a leading provider of Information and Communication Technology (ICT) for service providers, estimates that by 2024, 40% of the world will be connected by 5G.

The “G” in 5G simply stands for “generation.” 1G was analog cellular service. 2G technologies were the first generation of digital cellular technologies. 3G technologies improved speeds from 200kbps to several megabits per second. 4G technologies are currently offering hundreds of Mbps and even up to gigabit-level speeds. 5G offers several new aspects: bigger channels to offer faster speeds, lower latency for higher responsiveness, and the ability to connect more devices at once.

What Role will Artificial Intelligence Play on 5G Networks? 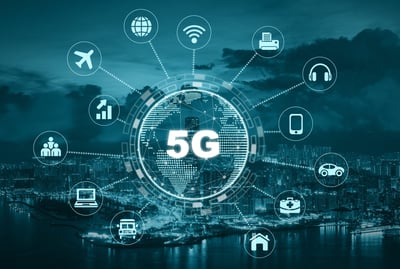 There are many complexities inherent in adopting 5G networks, and one way the industry is addressing those complexities is by integrating artificial intelligence into networks. When Ericsson surveyed decision-makers from 132 worldwide cellular companies, over 50% said they expected to integrate AI into their 5G networks by the end of 2020. The primary focus of AI integration is reducing capital expenditures, optimizing network performance, and building new revenue streams. 55% of decision-makers stated that AI is already being used to improve customer service and enhance customer experience by improving network quality and offering personalized services. 70% believe that using AI in network planning is the best method for recouping the investments made on switching networks to 5G. 64% of survey respondents will focus their AI efforts on network performance management. Other areas where cellular decision-makers intend to focus AI investments include managing SLAs, product life cycles, networks, and revenue.

There are challenges associated with integrating AI into 5G networks, of course. Effective mechanisms for collecting, structuring, and analyzing the enormous volumes of data amassed by AI must be developed. For that reason, early AI adopters who find solutions to these challenges will emerge as the clear frontrunners as 5G networks become connected.

Why is 5G Relevant to the Field of AI?

While our smartphones have gotten increasingly smaller, the core algorithms that run them have not evolved since the 1990s. Therefore, 5G systems consume far more power than desired and achieve lower data rates than expected. Replacing traditional wireless algorithms with deep learning AI will dramatically reduce power consumption and improve performance. This approach will be fundamentally more significant than focusing AI primarily on network management and scheduling.

Further, bandwidth used by current cellular networks operates on the radio spectrum. The electromagnetic waves in the frequency range of the radio spectrum are called radio waves. Radio waves are widely used in telecommunication, along with numerous other modern technologies. National laws strictly regulate interference between users of different radio waves, and the International Telecommunication Union (ITU) oversees the coordination of these laws. There is concern that the growing use of wireless technologies will overcrowd the airwaves our devices use to communicate with one another. One proposed method for resolving this issue is to develop communication devices that don’t broadcast on the same frequency every time. AI algorithms would then be used to find available frequencies by enabling intelligent awareness of RF activity that was not previously feasible. 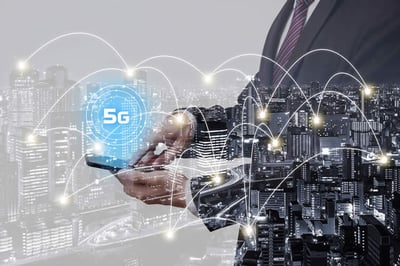 While 5G is up to 20 times faster than 4G, it offers more than just faster speeds. Due to its low latency, 5G speeds will allow developers to create applications that take full advantage of improved response times, including near real-time video transmission for sporting events or security purposes. Additionally, 5G connectivity will allow more access to real-time data from various solutions. 5G leverages Internet of Things (IoT) sensors that last for years, requiring far less power for operation. This could allow remote detection of farming irrigation levels and equipment condition changes in factories. Doctors could securely access patient data more easily. All these opportunities will require the use of AI to make them functional.

How Does 5G Help AI?

Edge computing is the concept of processing and analyzing data in servers closer to the applications they serve. While it is growing in popularity and opening new markets for telecom providers, among other industries, many have argued that introducing “connected” products, such as coffee cups and pill dispensers, did not cause the market to spike as expected. Recent AI technology advancements, however, have begun to revolutionize industries and the amount of value all this connectivity can provide to consumers by combining big data, IoT, and AI.

5G accelerates this revolution because the 5G network architecture easily supports AI processing. The 5G network architecture will change the future of artificial intelligence. 5G will enhance the speed and integration of other technologies, while AI will allow machines and systems to function with intelligence levels similar to that of humans. In a nutshell, 5G speeds up the services on the cloud while AI analyzes and learns from the same data faster.
^ Back to Top

What is Machine Learning?

Simply put, machine learning (ML) is a subset of AI that creates algorithms and statistical models to perform a specific task without using explicit instructions, relying instead on patterns and inference. ML algorithms build mathematical models based on sample data, called training data, to make predictions or decisions without being programmed specifically for that task. Learned signal processing algorithms can empower the next generation of wireless systems with significant reductions in power consumption and improvements in density, throughput, and accuracy when compared to the brittle and manually designed systems of today.

Deep learning is a subset of machine learning in which the algorithms used have many levels that each provide a different interpretation of the data. The subsequent network of algorithms is known as artificial neural networks because it resembles the neural networks of the human brain. Neural networks that learn how to communicate effectively, even under harsh impairments, are fast becoming a reality.

How Can We Leverage Machine Learning and AI for 5G? 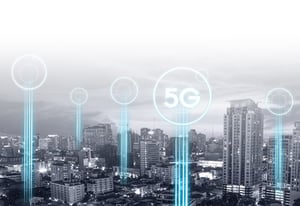 A fully operative and efficient 5G network cannot be complete without AI. ML and AI integration into the network edge can be achieved through the use of 5G networks. 5G enables simultaneous connections to multiple IoT devices, generating massive amounts of data that must be processed using ML and AI.

When ML and AI are integrated with 5G multi-access edge computing (MEC), wireless providers can offer:

Why is Machine Learning Important for 5G Wireless Systems?

Existing 4G networks use Internet Protocol (IP) broadband connectivity to transmit, which offers poor efficiency. ML and AI allow 5G networks to be predictive and proactive, which is essential for 5G networks to become functional. By integrating ML into 5G technology, intelligent base stations will be able to make decisions for themselves, and mobile devices will be able to create dynamically adaptable clusters based on learned data. This will improve the efficiency, latency, and reliability of network applications.

Potentials and Limitations of Machine Learning for 5G Communications

As the 5G network becomes increasingly complex and novel uses such as autonomous cars, industrial automation, virtual reality, e-health, and others emerge, ML will become essential in making the 5G vision a reality. As with any new technology, there are both significant potentials to be achieved and limitations to be overcome.

Potentials of ML for 5G communications include: 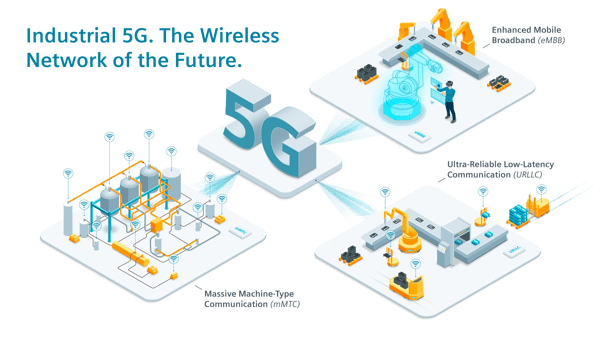 Limitations of ML for 5G communications include:

Top 5G Innovations on the Horizon

With all this potential for using ML and AI to integrate with 5G networks, industries are already working toward innovating with 5G. Some of the top innovations on the horizon include:

Share This Image On Your Site
^ Back to Top 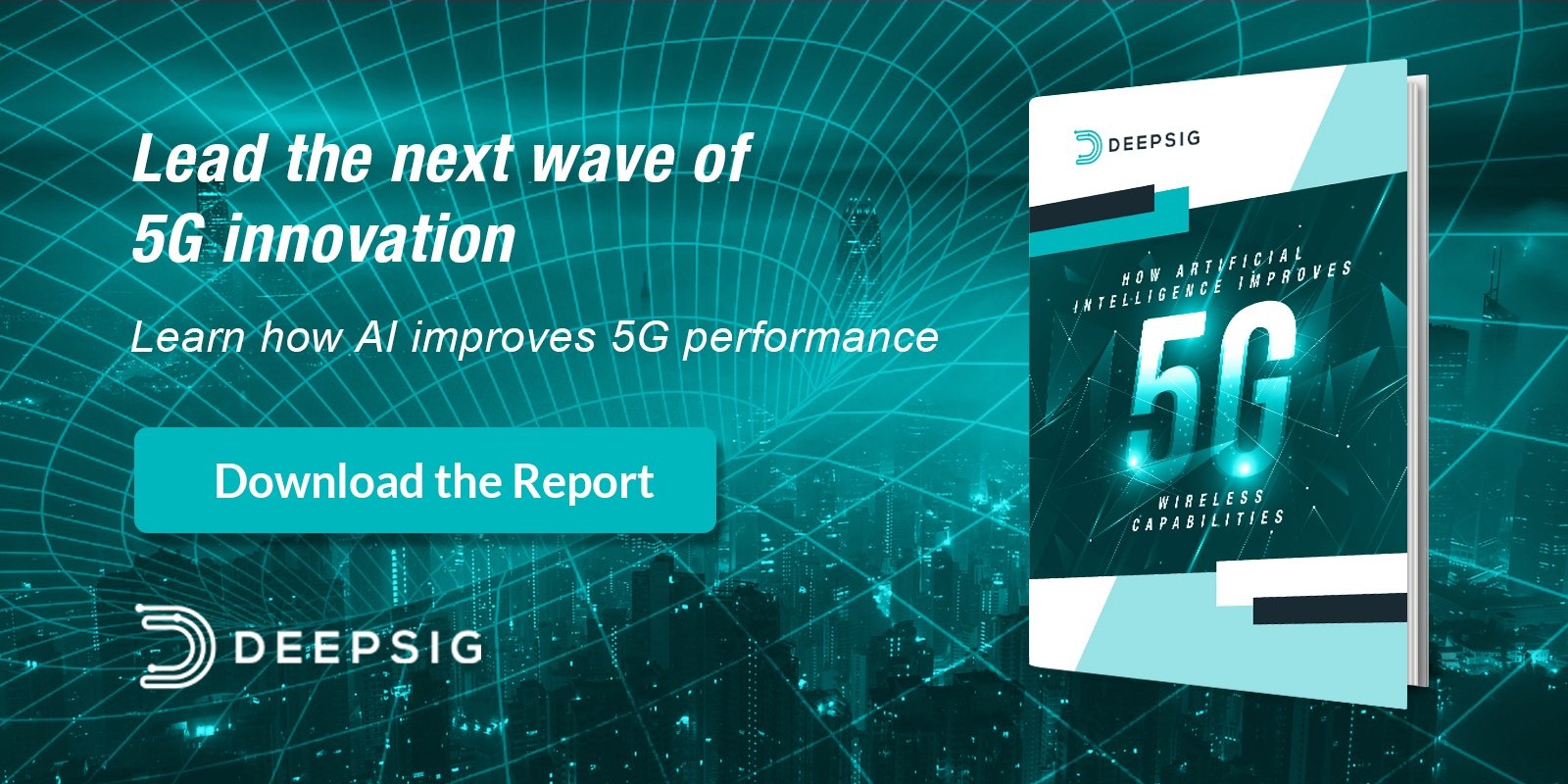